The Mott Park Public Golf Course Association started working on a Master Plan for the former golf course once they recognized, after 5 years of trying, that it was not feasible to restore it and re-open it as a public golf course: the costs would be too great, the funding sources were not available and no business plan could be developed to avoid running the course at a loss.

We began by soliciting input from the Flint community to determine what our citizens and neighbors would want to see the former golf course used for. On January 26, 2015, Adam Moore, an Urban Planner and then a member of the association board, facilitated a meeting at Kettering University to allow concerned members of the Flint community and the nearby neighborhoods to say what they would like to see at the old golf course. At that time, it had mostly been overgrown with unsightly weeds and tall grass except where a running course was being maintained by volunteers for the annual Turkey Trot.

The association board, renamed the Mott Park Recreation Association, has taken the following steps to develop a master plan with short-range, intermediate-range, and long-range objectives for the area, based upon the ideas submitted by the community. The goal was to create a self-sustaining, attractive area that would be an asset to the nearby neighborhoods and the community as a whole by providing high quality recreational opportunities focused on the Flint River.

The board took those suggestions and grouped them together into interest areas. Then they presented them to a class of Landscape Architecture students form Michigan State University with instructions to prepare plan drawings for how those ideas could best be incorporated into the area if money were no object. The students toured the area with members of the board on October 16, 2015. 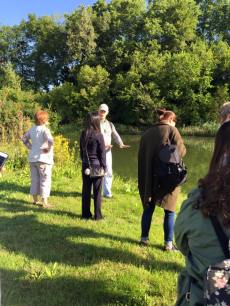 The MSU students produced beautiful plans for the area, giving a picture of a goal to which the board could aspire. Three of their plans are pictured below. One of the common features of their plans is the incorporation of a meditation, contemplation, or “healing” garden in the space adjacent to McLaren Hospital. This concept was so well-received that the board continued to incorporate it in area plans as a long-range goal.

The board then made contact with a planning class at the University of Michigan-Flint. There instructions were to develop a three stage action plan for the area incorporating as many elements from the public comments as possible, with those requiring the most funding being deferred until later. Those plan drawings were delivered to the association board about a year following the first public meeting, in mid-winter 2016.

On March 15, the board held a public site plan presentation at Kettering University. Board Chairman Tom Saxton told the assembled community members the process by which the plan was being developed and displayed the plan drawings from both MSU and UM-F.

The board is working on a formal text draft of the plan which will be used to seek funding for the future stages. In the mean time, we are working to raise funds to allow us to maintain the park and take small steps toward our future goals.